The longhorn beetles are a large family of beetles, with over 26,000 species described (35,000 species described till the current year presumably), slightly more than half from the Eastern Hemisphere. Most species are characterized by extremely long antennae, which are often as long as or longer than the beetle's body composed of an average 10-30 segments in each antennae.
Meet it's neighbors in this visual list of Cerambycidae family insects currently available on this wikipedia, There are several images with absent links here, please add links to the images without any links. 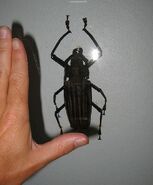